A Map of Poopy Hot Spots in San Francisco:
http://blog.sfgate.com/ontheblock/2014/11/28/mapping-s-f-s-most-pooped-upon-neighborhoods-and-their-paradoxically-pricey-real-estate/

Bonus, you can pay millions for the privilege of waking up to a steaming pile~

Click link above for video, c&p article under cut.

I suppose it was inevitable, what with New May Wah invading on their turf lo' these many years, but I still shopped in all the Asian markets and found things at ST that I couldn't find elsewhere (including a bomb tonkatsu sauce and pickles still in my fridge); I also enjoyed the respite from being constantly shoved. May the owners be well.

Is there a closed store from San Francisco that you miss?

Vacant lots that you see staying vacant too long?

Having lived in the city for decades, I truly was intrigued by this article. I want to add that I became aware of what a legitimately serious issue toilets were while enjoying Bill Bryson's At Home: A Short History of Private Life (which I recommend, his audio books are also excellent); hearing easy to understand explanations of the horror of old London and the cowboy era of America was enlightening. First world problems? We take the potty for granted.

This article is highly relevant to our city, but it is also wonderfully clever, the puns are just right and add a necessary levity worthy of the New York Times (if it had a few Oxford college words, lol). There's no point avoiding the puns anyway, just let them happen as author Rachel Swan does. Do you have any city bathroom stories to tell? Do you ideas or experience on how to improve the situation?

Btw, I realize this LJ community has slowed down, but I hope there are still people out there who find the culture and general topics of the city to be interesting. I have mentioned

sanfrancisco within my own journal as well.

Who wouldn't want to read this?!

A good recent article about trees in San Francisco's Golden Gate Park that is well worth reading.

How are the trees where you live?

Wind was the problem. Trees were the solution.

The strong ocean breeze that batters the Presidio today was an even more malevolent force in the former military outpost's early days. It pushed sand under doorways and through windowsills, which literally piled up in kitchens.

The simple logic of the Army's largest horticultural experiment -- carpet-bombing the sandy dunes of the Presidio with trees from 1886 to 1900 -- was a solution that eventually turned into a problem. In that short span of time, the Army populated the area with Monterey pine and cypress, along with the ubiquitous Tasmanian blue gum, better known as the eucalyptus tree.

After the planting, the Army all but forgot about its arboreal creation for nearly 100 years. When the last soldiers packed up and left in 1994, those windbreaks, by then an unkempt and unhealthy 300-acre forest, were in shambles.

"The forest was in decline," said Peter Ehrlich, the Presidio Trust's forester, who has for the past decade been leading revitalization efforts. The Trust manages the former base.

Those efforts have included pruning and planting a tree that other locales -- nearby Angel Island, for instance -- have worked hard to remove.

It could be said that no tree in California is as common or as controversial as the eucalyptus, which started to fall out of favor in the 1980s. It's reviled by some as an invasive species that must be eradicated, and defended by others as part of the state's polyglot flora. On Mount Sutro, for instance, neighbors are fighting UC San Francisco's plans to thin the forest, while huge stands grow unabated atop parts of the Marin Headlands.

The Presidio is not tearing out its eucalyptus forest for a simple reason: It's not allowed to. Many of the area's trees -- mostly pine, cypress and eucalyptus -- were planted more than a century ago and are under protected status.

"We want eucalyptus here because it's part of the historic designation," Ehrlich said. "We have to do it because it's a cultural forest."

That designation came in 1963 when the U.S. government declared the Presidio a National Historic Landmark District.

Therefore, the park's forest cannot just be formed at will. Part of it must be kept intact because of the Army's planting efforts, while other parts are being restored to original habitat.

That, according to Ehrlich, entails making it a healthy place for trees of all kinds, native and non-native.

"We're trying to understand the unique qualities of this place, to experiment, and not import artificial ideas about how to care for the forest but actually develop indigenous ways of thinking about it," Michael Boland, chief of Presidio planning, said of their approach to managing the forest.

In the past decade, the Presidio Trust, which manages the area, has as part of its reforestation program planted 3,500 trees: redwood, oak, cypress and pine.
( continued with THE ARMY AS GARDENERCollapse )

The Presidio Trust on Monday announced that it rejected all three proposals for the former commissary site near Crissy Field.
The team behind the most prominent of those proposals, a museum featuring filmmaker George Lucas’ vast art collection, immediately indicated that it was seeking alternate sites for its project.

In the roughly two years since the Trust asked for proposals for the site, the debate has morphed into something beyond a discussion about what type of building is best for the site. It has drawn into its orbit national figures -- U.S. Sen. Dianne Feinstein, Mayor Ed Lee, Steve Jobs’ widow and even MC Hammer -- who all backed the Lucas Cultural Arts Museum. Others have said any decision should be postponed until the completion of work on Doyle Drive.

In many ways, the arguments over the Presidio have appeared to carry water for larger issues: conservation and tradition vs. change and innovation, big private money vs. publicly respected nonprofits.

The very two-sided debate has pitted “Star Wars” creator Lucas, and his hopes to build the museum for his art collection, against longtime Trust partner the Golden Gate National Parks Conservancy and its plan to build the multiuse cultural center.

Previous attempts by Gap founder Donald Fisher to open a private art museum in the Presidio were rebuffed. The art collection was eventually donated to the San Francisco Museum of Modern Art.

The Presidio Trust requested proposals in November 2012 to take advantage of the eventual linking of Crissy Field to the former military base’s center, the Parade Ground. The Trust’s criteria for the site where the Sports Basement store now sits were that the proposals had to fit in with the national park’s aesthetics, serve as a cultural institution and recognize the area’s history.

The three finalists unveiled their proposals in November, but were all rejected by the Trust for being too big or not suitable for the setting.

Two years ago I was visiting SF and I saw in a shop window this moving picture.
If you're walking about the picture, the items on it are moving too. 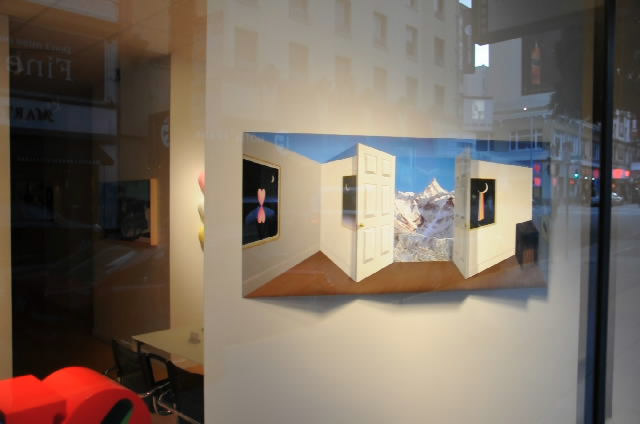 Can you tell me, what is this picture?
And where it is sold? (better if it's online store)

I've searched throughout the city, but maybe I'm just not looking thoroughly enough.

I'm trying to find where I could buy a flag of San Francisco. I've looked online and there are a few available for astronomical prices (compared to my other flags which have cost me ~$4). I'm not sure where to start.

Can anyone recommend a bridal shop in SF with affordable wedding dresses (looking for less than $1,000).  My mother is coming into town tomorrow (Saturday 10/20) to help me find a dress, and I procrastinated until now in finding a couple places to visit. I'm totally cool with consignment shops, recycled dresses, sample dresses, etc.  Or local designers with lower prices.